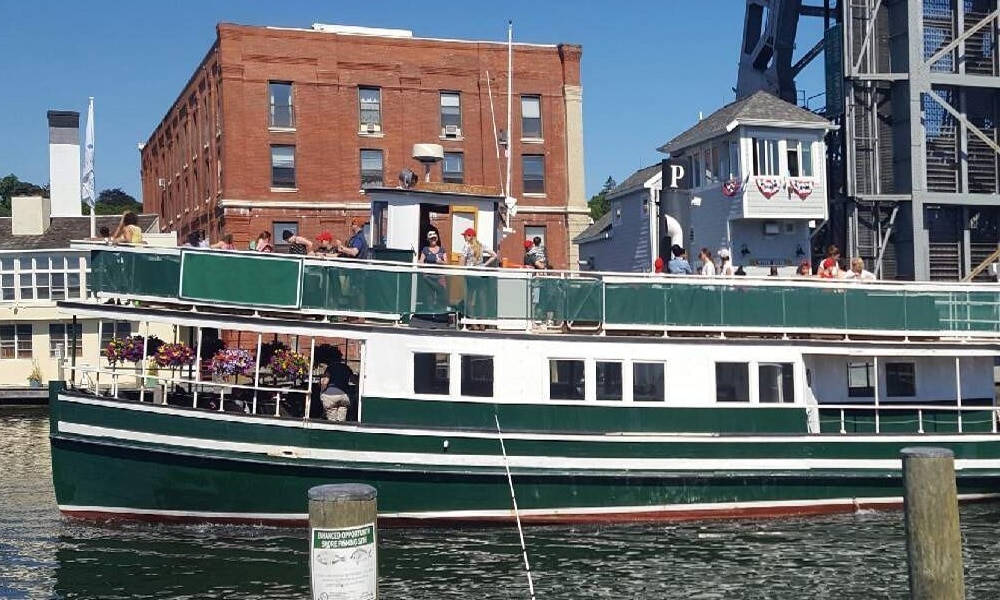 The “PRUDENCE” was built in Boothbay Harbor, Maine in 1911 as a wooden Steam Ferry. Now operating with a single diesel motor, this historic vessel is one of only three original Maine Steamboats still on the water today and is the oldest working ship in the country! She has been in continuous service and registered with the USCG Service every year since her launch in 1911.

PRUDENCE is 64FT and Coast Guard licensed for up to 100 passengers with a total of almost 2 million riders now under her bow! Called a “Coastal Steamer”, this special piece of American history has served originally as a passenger ferry in RI from 1911 to 1962. She was then sold and became a Charter vessel out of Hyanis Port, MA and was used for private parties and harbor tours of the Kennedy compound for the next 50 years!

In 2011, The Cape Cod Maritime Museum celebrated the 100 year anniversary of Prudence in Hyanis Port. At which Tim Reed, the son of the original builder of Prudence and founder of Boothbay Shipyard, stated “The craftsmanship of these boats was phenomenal”.

Prudence is a premier yacht offered by Yachts For All Seasons, to request more information about planning a yacht cruise event around Manhattan (NY) click here yacht planning request form or feel free to call us at 212-534-6380.

Meet the Owner
Jonathan Wilkes is a certified and Coast Guard-licensed captain with more than 25 years of marine industry experience. He has the knowledge needed to make your time on the water safe and memorable.
“I am proud to announce that Prudence will begin a new chapter in history as she sails into Greenwich, CT in the Spring of 2013.
Located in front of The Delamar Greenwich Harbor, one of the best small luxury hotels in the world, she will be
available for Harbor Cruises, Private and Corporate Parties and Special Events.”
-Capt. Jonathan Wilkes

CALL US FOR A QUOTE
Scroll to Top